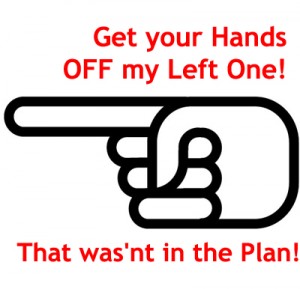 Got a call from the hospital late Friday asking me to come in for another ultra-sound as in the MRI they had noticed a small “something” in my left boob – OH CRAP!   The nurse said they thought it was a cyst or something so to come in to be sure to be sure.

On my way in on Monday and was due to meet a great friend Emer Halpenny for coffee afterwards she suggested she come with me – “happy days” you couldn’t get a person more positive in life than Emer.  Rocked in a bit late – texted Emer to say she could do it for me if she wanted!

Guess who I met in the waiting room that mad oul wan with lifes worries and fear of black nurses she kept trying to grab my attention – ehhhh no way was going near her again!!  Anyways got a great big hug from Emer then we marched in to the waiting room.  Had to degown again into my blue guna - was so used to stripping off just had the guna on the nurse came to collect me and she said ah no need – at least put your socks back on.    Great stuff went in with a blue gown, one black sock and one sort of light green!

A fabulous nurse called Vicki looked after me til Doc came around and then they started the ultrasound for ages they couldn’t see anything another Doc had a look and they had to refer back to the MRI to try find this thing.   They did finally and said I had to do another Biopsy – this honest to God was the only painful procedure I had been through so was shitting myself and feeling sorry for myself.

Oh My God they were so nice Vickie was behind me holding and literally stroking my hand and the Doc trying to distract me – however this time didn’t hurt a bit!  Someone told me that was a good sign – at this stage – that sounds good to me.  Got five or so staples and a dye put into me – which I was informed stayed in me but not to worry I wouldn’t buzz at airport security – Oh God the chance of buzzing at an airport would be very appealing at the moment!!

Then back into the tit sandwich maker for another two photos then thankfully that was the end of it.    Emer was directed by the nurse to buy me a big cream bun so off we went to Starbucks for coffee, cake and a chat – what a great way to spend an hour!

Not sure how I feel about the left one…….mmmmm…..the Doc did reassure me that it looked innocent and because what was happening with the right one they were being cautious.   To be honest one off, two off at this point I don’t think I really mind as long as the bastard cancer is gone and I dont have to go through this for a second time at a later stage.  36D pair would be nice

I have a good feeling that it is nothing – so gonna hold onto that!

Lovely lunch with my sister and soul-mate Mia and my Mam in O’D's afterwards!