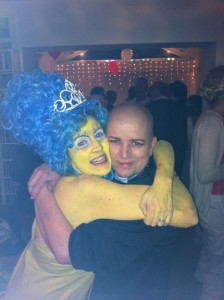 Started off on Monday with the first hospital appointment for the MRI.  Met my lovely friend Alvy for lunch in Stillorgan first (as you have to do of course!) and Alvy kindly came to the appointment with me in Vincents.  Waited around an hour and “gently” reminded the lady that I had been waiting there an hour – got seen to few minutes later.  Lovely blue guna on me again oh I had forgotten how pretty they are.  Went in to get ready for the scan and then realised they needed to but a line in me …. oh no….the dreaded hunt the vein which is becoming increasingly painful.  All my infusions have to be given in the arm opposite my cancer so the left arm is the pin cushion she tried once with no luck (and it really hurt) then I asked can we not just use my right seeing as it wasnt chemo she asked a doctor and bingo it was okay and she got in first time.  MRI was no problem no Stairway to Heaven this time think it was Strauss couldn’t hear it with the noise of the machine which feels like you are lying beside a Jack Hammer – which by the way I have never done.    Done and dusted after 30 minutes in the machine and off we went!

Wednesday back in again for Mammogram and Ultra-Sound on Cancerous Chloe.  Donned the blue guna again and saw the nurse quickly (who was very nice) into the machine definitely designed by a man – the boob sandwich maker – well squished I was but it’s not painful whatsoever you just feel a bit of a tit

Off then to ultra-sound which I didn’t realise I was going to have.  I was lying on a bed waiting to be seen and could hear doctors and nurses whispering outside, it’s a terrible feeling as you get paranoid thinking God are they talking about me and have they some news that they don’t want to hear.  Never found out about that thank God.  A lovely doctor did the ultra-sound which again was no bother at all just a bit “gooey”.   Another thing over with.

Friday was the big day for all the results and the meeting with the Surgeon and the Breast Cancer nurse.  To say I was hyper all week was an understatement.  I am not one to worry so wasnt really worrying about the results but maybe in my subconscious I was, as seriously was off the planet doing silly things, forgetting things, putting the frozen chips in the cupboard, nearly threw my iPhone in the fire instead of a log and other ridiculous things.  However was living on an average of three hours sleep a night and it was driving me mad!

Myself and Hubby went over to Vincents to get the news.  I was hyper again and he was a nervous wreck, it was huge news to be receiving and you are just hoping, hoping, hoping that its gonna be good news.  To be honest I had a good feeling going in that it was going to be good news.  How could it not be with so many people like you guys behind me, wishing me well and spurring me on.

The Doc said that I was progressing very well, the chemo is working, the tumour is shrinking,  he was going to maybe do operation earlier and not do the last three chemos but the Oncologist said I am responding “very well” to the chemo and advised I finish – I agreed whole heartedly and want to finish to shrink it even further.  I would really like an immediate reconstruction after operation – he said that he would be happy with this decision if the plastics Doctor was happy with that – so have an appointment to meet her in the next two weeks.  As I need radiotherapy sometimes it’s not possible to get immediate reconstruction so we will have to wait and see but Surgeon is behind me on it which is great.  Otherwise be nearly a year with my boob – dont fancy the thoughts of that and would be very unbalanced

However the Best News is that he said that after my mastectomy that I would be CANCER FREE – I was a little taken aback and got him to repeat it and at end of meeting said “Okay so you are saying that after my operation the cancer will be gone” he said “yes”.  Sure how much better could that meeting have went?

Still a huge way to go with chemo, operation, reconstruction, radiotherapy for six weeks – but you know what I don’t give a rats arse – all I heard was that I will be CANCER FREE they can chop off anything they want as long as cancer is gone.   Needless to say the relief was just immense.  First person to call was of course my sis who was delighted.  Called my parents then and got totally overwhelmed with my Dad when I was telling him.  We decided to meet in our local O’Dwyers in Kilmacud for some nibbles and a drink.  I had two pints of Carlsberg (probably the best lager in the world) they were honestly the sweetest tasting pints of Carslberg I ever had. 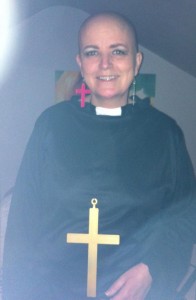 Serious celebrations were to be had on Saturday at Karens 40th – off we went, Sinead O’Connor, Marge Simpson, Dr Seymour Bush and the Incredible Hulk.   When we went into the party a Cleopatra met us at the door and took our coats, a beautiful looking girl from America.   Cleopatra asked me is your name Deirdre and I said yes (of course) and she says Oh My God its great to meet you I read your blog – I mean how cool is that an American at the party reading my blog

We had an absolute blast at the party such a laugh.  Great craic with Val, Steve, Helena, Karen, Andrew, Julieanne and Mark and so many others.  The ole Sinead look went down well it was the first time I was out in public bald and it didn’t bother me a bit – quite liked it actually.  However did have soot, brown eye shadow rubbed on my head to make it look like I had a little stubble!  We partied on til around 5am was great craic loads of fun people and very funny situations – Karen you have great friends and family – fair play to you for throwing such a brilliant party! 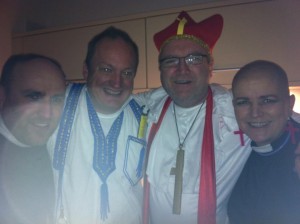 Good things that happened this week:-

Can I ask one more favour I know some of you have voted for me on www.dolledup.ie/competition if you havent and you had a minute could you go in and vote for me you just need to register first only takes a minute.  The prize is basically a huge makeover, spa break, photoshoot, restyling and so much more – I would love it.   Dont want to push you but preeety please for a Cancer person (you see the cancer card might work here).  The girl coming second keeps coming back up and kicking my ass.  I want to kick ass in this competition as well as cancer

I must say when I went into the meeting as I said earlier I was very positive and had a good feeling.  I have not even a miniscule doubt in my mind that you guys were all in there with me all those good wishes  before on FB, texts, messages – you really have no idea how great that all made me feel I felt so privileged, popular, loved and extremely grateful to you all for your support.   So please feel good that you have made me feel good.

That’s it folks back in Chemo on Thursday

but hey is working that will make it easier and its the new chemo room which is supposed to be much better!