Decided to share “my girls” with you to show you the difference between the two of them. Meet Floppy Fiona and Cancerous Chloe.

Must say they look way better when I had my hands in the air and they weren’t keeping my knees warm. Cancerous Chloe is now a totally different shape and sort of stands up on her own this is obviously due to the 7cm and maybe another 2cm tumour inside her! Boobs rising instead of falling at my age you would think was a miracle, not in this case

Wanted to let women (and men who check their other halves boobs) that you are NOT just looking for a big lump in your breast or under your arm. Look out for physical changes as well.

As you can see from the photo above, the right one is now much smaller (would say its a good few inches smaller you can’t see from photo) and the nipple is really unusual, the side of the boobs look like a balloon after you let the air out – it looks really strange. When standing in front of the mirror you can really really see the difference between the two of them and this was really the alarm bell for me. As the doctor kindly told me back in Naas Hospital two months ago with four interns around me and me with my hands in the air with my bra strangling me “can you see the way the right breast is deformed” – thanks Dr Butt – just loving your bedside manner – then you all walk away and leave me there in the bed thinking Jesus came in for pain in tummy and go home with dodgy tit. All doctors should as part of their study do a module on being human. 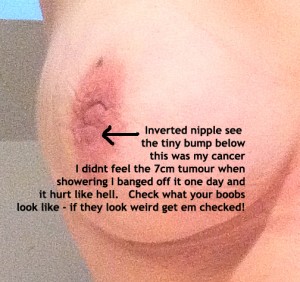 In this photo to the right you can actually see the lump which is my cancer, right under my nipple. This was the start of my tumour. Also nipple is inverted and boob sort of being dragged to the left. Have had three kids, done my “bit” of breastfeeding duty so nipples always a little bumpy anyhow. Therefore to be honest just didn’t take any notice of it – I mean how often do we look at our own boobs? Never noticed anything at all until one day knocked into the bump under my nipple and holy shit that hurt! That is when I really noticed that there was actually a lump there. Was on my To Do List to get it checked out probably left it a few weeks – once got as far as Doctor reception but got a call and left. One day took a good look at the two of the and really really noticed wow there is something seriously weird-looking about the two of them. Bit like Laurel and Hardy just didn’t seem to be the perfect match.

Wasnt going to post this one as it is really not a nice photo but its clearer as to how they are shaped different – better post this blog now otherwise will chicken out! You think this picture is bad you should have seen the amount of boobs that were deleted

So THIS is my cancer it wasnt that I found the 7cm tumour inside my boob (have no idea how to be honest I never noticed it). They do say big boobs big cancer and I suppose I was never a 32A

So girls I have bared my boobs and floated (ha ha literally floated) them in Cyberspace to show you what to look out for. Loads of people asking me what they can do to help me out – would love it if next time you are at docs get him/her to take a quick look. To be honest I don’t care who you get to take a look whatever your into, hubby, wife, partner, dentist, milkman, principal of school or the local swinger! One thing I know about this shitty disease is I don’t want ANYONE ELSE TO GET IT it’s not nice and some days are good and some days are really bad and its one thing you can do without in life. So get feeling people PLEASE

Funny thing about boobs. I always hated having big boobs, really hated it. Seem to spend most of my teenage and mid-twenties and thirties in tops that were way to big for me and didn’t show off my boobs! Would have had a reduction if funds had allowed me.

Now? Now I love the size of my boobs they are me and I think I would look weird with a small pair, would make me look unbalanced. Yeah right I know my brain is unbalanced but that’s always been like that!

When Cancerous Chloe gets the chop next year I did ask them what happens to Fiona? They said that they would “match” the old boob to the new boob as seriously they couldn’t fit a floppy boob back on could they? So looks like Floppy Fiona will be getting lifted up to match the new one. Also seemingly to “make” the new boob common procedure is a tummy tuck to take the fat off there for the new boob – so that’s a bonus!

For those following this blog and still have questions about boob reconstruction a new friend of mine Darina gave me this information which is really interesting. Breast Reconstruction

If reading this via Facebook would ask if you could share the post so other women out there can see the photos and maybe have a better idea of what to look for.